Aid International Development Forum (AIDF) has released an infographic on healthcare in South East Asia (SEA). The infographic provides an overview of current health threats, including those related to water, sanitation and hygiene (WASH), trends in financing for health focus areas as well as gaps in development assistance.

Despite significant progress made over the last decade to improve access to water, sanitation and raising vaccination coverage, the region continues to struggle with underdeveloped public healthcare system. Over 130 million people still lack access to essential health services representing 21% of SEA population and 176 million, or 28%, live without sanitation access.

The infographic is a timely release for this week’s World Health Assembly in Geneva and the upcoming Aid & Development Asia Summit in Bangkok on 21-22 June, which gathers 250 humanitarian leaders to discuss how technological innovations and collaboration can improve health resilience and aid delivery in SEA. The infographic presents factors that affect heath status in the region and highlights areas which limit SEA progress towards Sustainable Development Goals (SDG).

The healthcare spending in SEA remains lower than any other region in the world. As a result, the availability of medical personnel and hospital beds are five times lower in comparison with developed economies. On average there are only 0.6 physicians per 1,000 population in SEA in contrast to Organisation for Economic Co-operation and Development (OECD) countries coverage of 3.2.

Critical shortage of midwives resulted in SEA not achieving the Millennium Development Goal of reducing under-five deaths by two thirds. New-born deaths account for more than half of child deaths in the region, despite under-five deaths decreasing by 64% since 1990.

Funding for the World Health Organisation (WHO) grew 4% and 17.9% for UNICEF, as a result of need to address escalating number of communicable diseases outbreaks. Overall development assistance for health in the region reached US$ 35.9 billion. 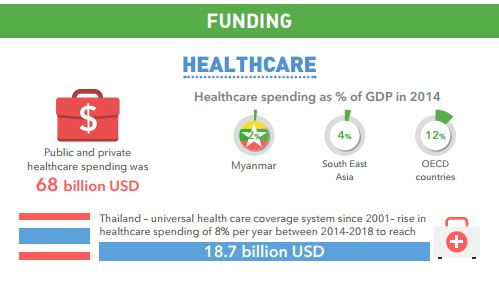 According to the latest figures released by WHO, SEA accounts for 41% of the global burden in TB incidence and 52% of all those infected with dengue live in the region. During 2014-2016, the funding gap to combat these diseases in SEA was US$ 4.3 million.

Amongst non-communicable diseases, diarrhoea is the second leading cause of child death.

SEA was amongst 42 countries which experienced first Zika outbreak since 2015 with health authorities issuing public warnings, as they prepare for the possible spread of the virus from other countries. U.S. Agency for International Development announced US$ 30 million grand challenge to combat Zika.

Immunisation resulted in 79% drop of deaths from measles, preventing estimated 17.1 million deaths since 2000 and making measles vaccine one of the best buys in public health. Also evidenced by 8.2% increase in financing offered by public-private partnership GAVI, the Vaccine Alliance, which reached US$ 1.8 billion in 2014.

The SDGs and gaps in financing urge humanitarian actors to look for innovative approaches and latest technologies which have the potential to increase the scale of impact of humanitarian work to achieve more with less.

For more information about the infographic and to request participation, please contact Alina O’Keeffe, Marketing Manager at aokeeffe@aidforum.org

Please include attribution to http://asia.aidforum.org with this graphic.

Organisations supporting this important and timely summit include:

Be part of the humanitarian aid and development community!

Register now to receive AIDF's newsletter with insights into latest trends, innovations and best practice in the humanitarian and development sectors